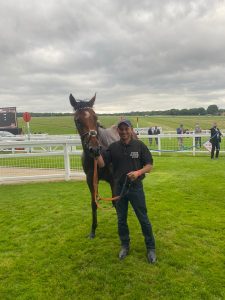 He is out of Affinity a winner at three years over 1 mile 4 furlongs. Amalfi Bay is from a family that Elite Racing has had a lot of success with. His dam Affinity is a half sister to the Joint Champion Older Mare in 2005 Soviet Song, she won nine races including five Group 1 races, a Group 2 race and a Listed race.She is a full Sister to Sister Act, the dam of Ribbons, Champion Older Mare in Ireland 2015.  She is also a half sister to Baralinka the dam of Marlinka who is the dam of Marsha the winner of the Group 1 races Nunthorpe and Prix de L’Abbaye as well as five other races. Narsha was sold for £6 million at Tattersalls  to Coolmore.

Her dam Pocket Watch was unraced but has produced one winner from three runners. Dream Bird is half sister to Four On Eight a winner of 4 races in the UK, Germany and abroad as well as placing eight times. Pocket Watch her dam is a half sister to Bauer a winner of the Group 3 Geelong Cup in Australia. Dream Bird’s grand dam Dali’s Grey was the winner of one race at three years in France and is the full sister to Diamilina a Group 2 and Group 3 winner in France. She is also the half sister to the former Ballyhane Stud stallion Diamond Green.

She was bred by owners Merry Fox Stud.She is out of Annabelle’s Charm a winner of three races which included the Listed Fund Dick Hern Fillies’ Stakes at Bath. She also placed in two Group 3 races with one being in Italy and the other at the Curragh in Ireland. Annabelle’s Charm has produced four winners from four runners out of six foals. Jumby Breeze is half sister to Charming Thought the winner of the Group 1 Middle Park Stakes and now a Darley stallion who stands at Dalham Hall Stud in Newmarket. Further back in the pedigree are Ballingarry, Aristotle, Starborough and St Nicholas Abbey. 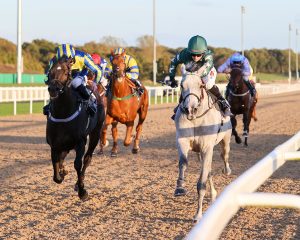 She was purchased at Tattersalls Book 1 sale in 2019 by Blue Diamond Stud Farm for 60,000 GNS. She is out of unraced mare Rose Of Miracles. Najeeba is half sister to progressing four year old Amtiyaz, a winner over 1 mile 4 furlongs, 1 mile 6 furlongs and 2 miles. Najeeba comes from the Born Gold family that gave the Wertheimer brothers Group 1 winner Goldikova, Group 1 winner Galikova, Group 1 placed and now a stallion Anodin and ten other winners.

He was purchased at Tattersalls Book 3 sale by his owner Dr Jamal Ahmadzadeh for 35,000 GNS. Rumi is from the family of Donna Viola, who won eleven races including the Group 1 Yellow Ribbon in the USA, the Group 2 Sunset & Vine Prix de l’Opera in France, the Group 3 Trusted Partner Matron Stakes in IRE and the Vodac Victress Stakes in the UK. Rumi’s family line also traces back to the good sprinters Frizzante (Group 1 July Cup winnner), Zidane and Firenze.

She is out of  Oasis Dream mare Oasis Sunset a winner over 7 furlongs. Umm Hurair is half sister to a son of Kodiac, Flash Gordon who was a winner over 6 furlongs and placed in Listed and a Group 3 race. He is now a stallion at Meelin Stud in Ireland. She is also the half sister to Sunset Dream the winner of two races over 7 furlongs and a mile. Umm Hurair’s grand dam sunset cafe has produced five out of eight winners including Group 1 Cheveley Park Stakes winner Seazun.

He is owned and bred by Merry Fox Stud who purchased the dam Passing Parade from the Tattersalls Book 1 sale. Passing Parade is out of a Juddmonte mare called Model Queen who was a winner of 7 and a half furlongs. Passing Parade is a half sister to Regal Parade a winner of the Group 1 Betfred Sprint cup and the Group 1 Prix Maurice De Gheest. She is also the half sister to Hot Prospect who finished 2nd in the Listed Steventon Stakes and 2nd in the Group 3 Winter Hill Stakes. Victory Roll is the full brother to Casual Reply who was in training here at Beckhampton.